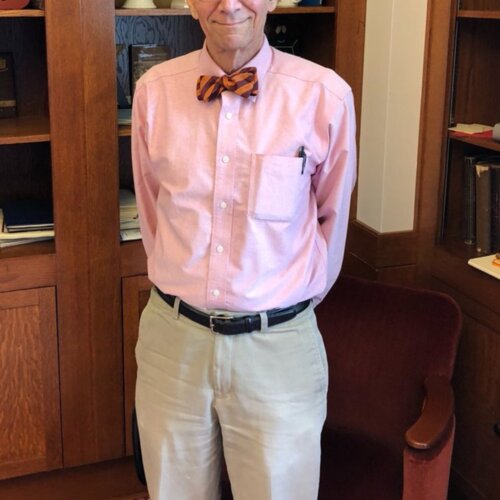 Audio clip of interview with Bud Brown speaking about the events of April 16, 2007, when 32 Hokies were tragically killed on Virginia Tech's Blacksburg campus.

It was cold, and the wind had been blowing for six days in a row. I walked to school that morning. It was a Monday, April 16, 2007, and I said, "I sure do hope that it gets better." And you know what happened next, it got worse. I was in my office. I had a class to prepare for, or maybe it was office hours or something like that. It was around 9 o'clock. One of my colleagues came in and said, "You know, look, there's some people running around out there in the courtyard between McBride and Holden with guns, automatic weapons and things. What's going on?" I said, "I don't know." Now, the previous week there had been two bomb threats called in. Maybe they were called in by you know who, who knows. So I looked, and I said, "Oh no, what's going on here?" I didn't know.

And then I was sitting there just preparing for a class the next day I think, and two students from University Honors were out in the hall. I knew one of them, "Hey Sam, what's going on?" "We're in lockdown. The building has been locked down. We can't get out." "Well come on in, let me show you some interesting stuff." So, I showed him a few cute mathematical puzzles and interesting objects, and 150 yards away there was an unspeakable horror going on. Then eventually we looked out and we saw students running out the entrance of Norris Hall, and they jumped over the edge of the sidewalk there and ran down towards the Drillfield with their hands over their heads. What in the world is going on here? And it was some kind of a disturbance in the building, but I thought well it's over now. Hmgh. And then when they said that we could go home they lifted the lockdown and said, "But don't go towards the Drillfield. Don't go towards the Drillfield. Don't go towards Burruss Hall. Don't go towards that side of campus, just go the other way."

"I'll be home. Call the children." I didn't say that then. I went home, and we sat there in just sort of mounting horror as the number of casualties. The deaths rose from 5 to 8 to 10 to 12, and they just kept going up and up and up and up and up and up. I was 150 yards from where it happened. What's going on? And gradually the details came out, and we had lunch and then I went upstairs to the little office that we have up there and after that the entire day was a blank. I blanked it out.