This collection contains the papers of William MacFarland Patton, a professor of civil engineering at Virginia Polytechnic Institute. The collection includes two manuscript drafts. The first of these, though incomplete and unidentified, represents the supplemental section of the second edition of Patton's A Pratical Treatise on Foundations. The second draft comprises a text book on civil engineering, apparently never published. Together with the manuscript pages are printed pages detached from Patton's A Treatise on Civil Engineering, to be incorporated in the new work. The manuscript is accompanied by a cover letter to the publisher from Patton. Also within the collection is patent documentation for two inventions by Patton: a breakwater and a pneumatic caisson. The collection also contains drawings for a bridge designed by McNairy, Claflin &amp; Company of Cleveland, Ohio. Completing the collection is the cover of a Virginia Agricultural &amp; Mechanical College writing tablet, bearing an early photograph of Academic Building 1 and Academic Building 2.

William MacFarland Patton, the son of John M. and Margaret William Patton, was born in Richmond, Virginia on August 22, 1845. He attended the Virginia Military Institute during the Civil War and served with the cadet corps in the Battle of New Market in 1864. Patton graduated from VMI in 1869 and left Virginia to engage in engineering in Central America and the Caribbean. Patton became an adjunct professor of civil egineering at VMI in 1873 and was promoted to full professor the following year, when he was also comissioned a colonel of hte state militia, a position he would hold until 1882, when he returned to private enterprise. During the next five years, he was involved in construction of the B&amp;O Railroad Susquhanna River bridge at Havre de Grace, Maryland, and the Ohio River bridge at Point Pleasant, West virginia, among other projects and also served as chief engineer of the Mobile and Birmingham and the Louisville, St. Louis and Texas railways. In 1887, he reutrned to VMI as chair of civil engineering and remained for two years. From 1889 to 1896, Patton was chiefly engaged in writing A Practical Treatise on Foundations and A Treatise on Civil Engineering, while also working on various engineering projects, including the Chicago Drainage Canal. In 1896, Patton was appointed the civil engineering chair at Virginia Agricultural &amp; Mechanical College (now Virginia Tech); he was named the first dean of the university's engineering department in 1904, and held that position until his death the following year.

Papers of William MacFarland Patton, civil engineer and professor at Virginia Agricultural &amp; Mechanical College (now Virginia Tech). Includes a partial draft of Patton's book, A Practical Treatise on Foundations and draft of an unpublished textbook on civil engineering, together with patent documentation for two inventions.

The Willliam MacFarland Patton Papers were acquired by Newman Library in 1954.

Permission to publish material from the William MacFarland Patton Papers must be obtained from Special Collections, Virginia Tech. 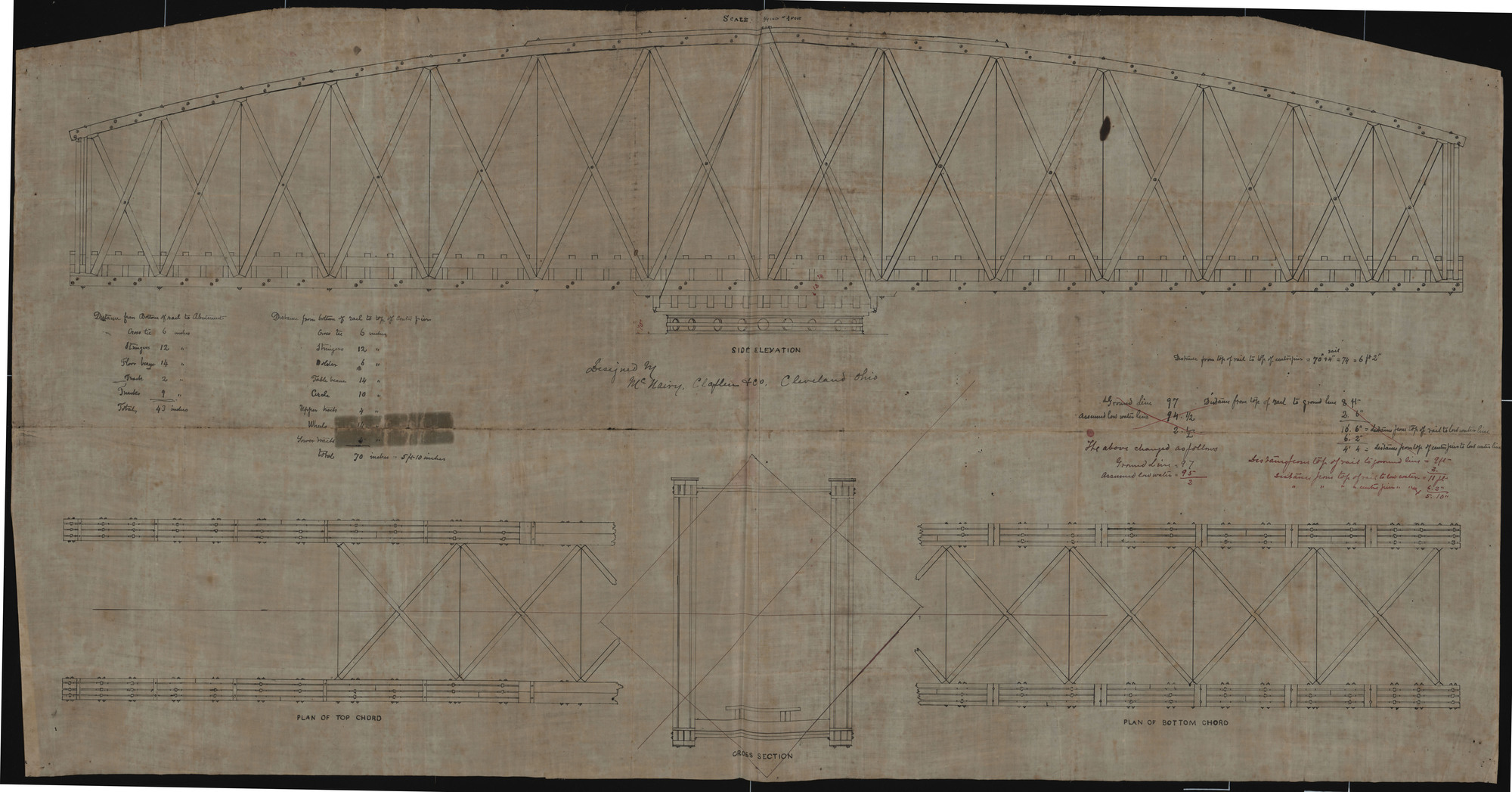 Dawing for a bridge designed by McNairy, Claflin & Company of Cleveland, Ohio.