Click on the image to magnify, scroll to adjust the zoom 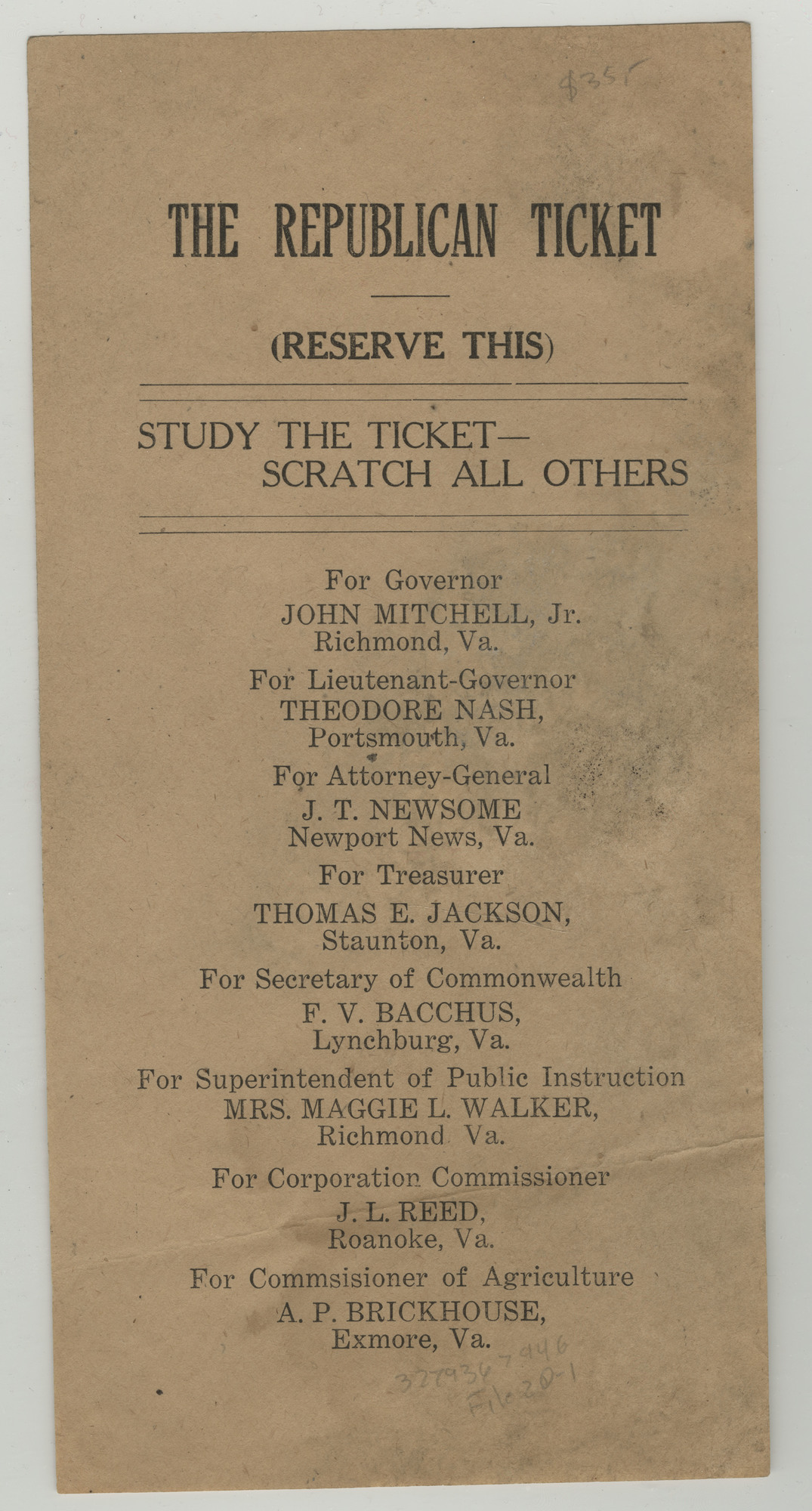 The Virginia Republican Party Flyer is a list, titled "The Republican Ticket" and printed on newsprint, of the so-called " Lily Black" Republican ticket of 1921 (an African American offshoot of the Republican party). Sought-after offices include: Governor, Lieutenant-Governor, Attorney-General, Treasurer, Secretary of Commonwealth, Superintendent of Public Instruction, Corporation Commissioner, and Commissioner of Agriculture. Maggie L. Walker of Richmond, Virginia, an African-American philanthropist and the first American female bank president, is listed as the Republican candidate for the Superintendent of Public Instruction. John Mitchell, Jr. of Richmond Virginia, the editor of the Richmond Planet, is listed as the Republican candidate for Governor.

Maggie Lena Mitchell was born on July 15, 1864 in Richmond, Virginia, and married Armstead Walker, Jr. in 1886. At age fourteen Maggie joined the local chapter of the Independent Order of St. Luke, a fraternal and cooperative insurance society. Eventually, Maggie achieved the title of Right Worthy Grand Secretary in 1899, created The St. Luke Herald in 1902, and founded the St. Luke Penny Savings Bank in 1903—thus making her the first woman to charter a bank in the United States. Maggie also devoted time to promoting African American women's rights. This civic concern eventually expressed itself in an unsuccessful bid for the office of Superintendent of Public Instruction in 1921. Maggie Lena Walker died on December 15, 1934.

John Mitchell, Jr. was born July 11, 1863. Mitchell was the editor of the Richmond Planet, a paper that exposed racial injustice, and the President of the National Afro-American Press Association. Elected to Richmond's Board of Alderman from Jackson Ward in 1892, Mitchell eventually made an unsuccessful bid for the governor's office in 1921. Mitchell also founded, and was president of, the Mechanics Savings Bank which fell into legal trouble and was eventually rechartered by the state in July, 1924. Due to the bank's failure, Mitchell lost his assets and eventually died on December 3, 1929.

Joseph Thomas ( J.T. ) Newsome was born on June 2, 1869 in Sussex County, Virginia, to Joseph and Anne Newsome. After attending Virginia Normal and Collegiate Institute in Petersburg, Newsome received his law degree from Howard University in 1898. Newsome married Mary Beatrice Winfield and moved to Newport News where he became a successful lawyer, the editor of the Newport News Star, a public speaker, and a politician. In 1921 Newsome unsuccessfully ran for state attorney general and the first congressional district seat. Joseph Thomas Newsome died on March 9, 1942.

See the Finding Aid for the Virginia Republican Party Ticket, 1921

Permission to publish material from the Virginia Republican Party Ticket must be obtained from Special Collections, Virginia Tech.