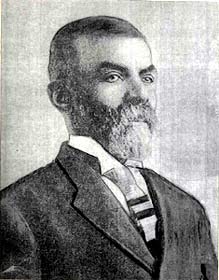 Jeffrey T. Wilson was born in Portsmouth, Virginia, in 1843. There is uncertainty about the ownership of his mother at the time of his birth and conflicting accounts, but Wilson appears to have been owned by the Charles A. Grice family, who he lived with beginning in 1853. Prior to then, he was living with his mother and stepfather (Moses Taylor?). According to his obituary, he learned to read and write in secret. Based on his diary, he was the body servant of A[lexnander]. P. Grice, likely the son of his owner, who served with Company A, Cohoon's Battalion, Virginia Infantry, at least during a part of 1862. In 1866, after being freed, Wilson enlisted and went to Europe with the U.S. Navy. When he returned home, he lived in the house he inherited from his mother. Wilson worked at the Portsmouth Navy Yard, as a laborer, and as a bailiff for the Federal Court at Norfolk. In his later years, from 1924 until his death in 1929, he wrote a column called "Colored Notes" for The Portsmouth Star. The column included social news, Wilson's political views, and issues of race relations--all themes that occur throughout his diaries. Wilson was active in the Emmanuel AME Church in Portsmouth, where he taught Sunday school. In June of 1929, Wilson was hit by a car. He died at his son's home, two months later, on August 25, 1929.