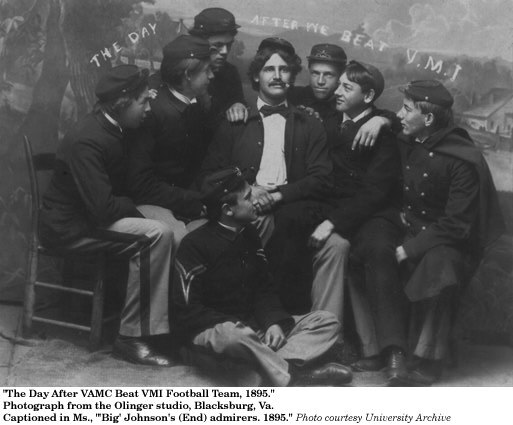 Photograph of the VAMC football team the day after they beat VMI at the Thanksgiving game in 1895.

One of the grandest traditions that Virginia Polytechnic Institute (V.P.I.) ever knew was its old rivalry with Virginia Military Institute (V.M.I.). Manifested in the splendid, annual "Military Classic of the South," this rivalry climaxed each football season in an unforgettable, four-day festival on Thanksgiving Day weekend. No matter the level of attainment for the year, the success of the football team's season was measured in the outcome of that preeminent meeting with V.M.I. in Roanoke on Gobbler Day. A prestigious series of pigskin victories was spoiled by a loss on Thanksgiving Day. Conversely, a miserable season of defeats was transformed magically into a victorious one if it ended in a triumph over arch-rival V.M.I.

The buildup for the Thanksgiving fete commenced far in advance of that autumnal holiday. Alumni, family, and "best girls" were alerted into preparation. For the "best girl," it meant at least a half dozen distinctive changes of costume. Trains and automobiles full of alumni descended on the Magic City the Wednesday before Thanksgiving, and the city was filled to capacity by beribboned celebrants. Parties and dances permeated the wee hours of that sparkling night as old-timers once again rejoined in the common bond of fellowship. One huge alumni ball was always held that evening.