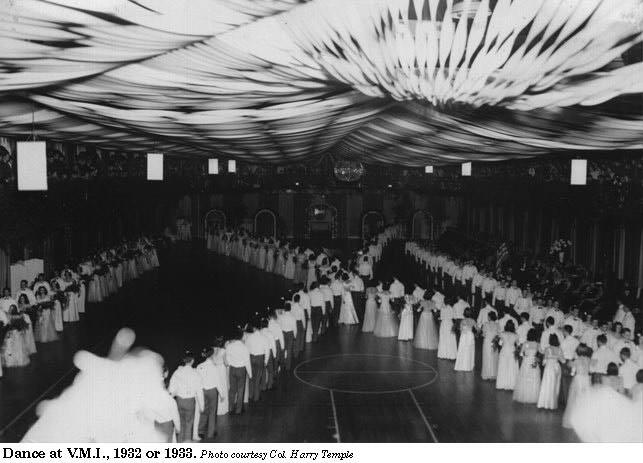 Cadets and their dates, alumni, faculty members, and various guests attended the dances in formal attire. Cadets wore paletots, mess jackets, or coatees; military officers wore their blues; and civilian men wore dinner jackets for the Friday evening dances. The German Club decorated the German Hall over the College Mess Hall, and the Cotillion Club decorated the War Memorial Gymnasium. Beginning at nine o'clock, each dance was opened by figures of couples promenading onto the dance floor, led by the club leader and president with their dates. The couples performed elaborate formations to a march type rendition of a musical number by one of the nation's big name bands. The figure completed, the couples halted in place, and the lights were dimmed subtly as the band went into a dreamy waltz. The ensuing number was a no-break event for those who had participated in the figure. Following the waltz, there was a brief pause for applause. Then the orchestra broke into a fox trot as those present assumed their usual dancing routines. One cannot describe adequately the glamorous ambiance of those formal military balls with their courtly chaperones and gracious surroundings amid colorful decorations; subdued lighting; superb dance music; immaculately uniformed men, resplendently attired; and groomed ladies in floor-length evening gowns, elbow-length gloves, meticulous hairdos, discrete makeup, and heady perfume.

The midnight intermission was initiated by another figure-like formation down the double flights of stairs of the vestibule to the College Mess Hall below the German Hall for a delightful, light supper. Dancing was renewed afterward and continued until two o'clock in the morning. The end of the evening was announced by the orchestra's rendition of either "Home, Sweet Home," "I'll See You In My Dreams," or "Goodnight Sweetheart" as the final number.

As policy of the cadets themselves, no drinking was permitted at those dances, and members of the dance clubs took particular measures to assure only proper behavior. Floor committees of cadets were designated to oversee quietly the propriety of the evening. Sometimes guests, particularly ones from the University of Virginia, would show the effects of imbibing. The floor committeemen would remove them unobtrusively from the dance floor and enforce their continued absence.

After Saturday morning classes, the two dance clubs held semi-formal dansants that afternoon in their respective halls. The cadets wore blue blouses with white waist belts and white gloves, military officers wore service uniforms, male civilians wore dark business suits, and the ladies wore tea dance dresses. Not being fully formal events, the Shag, the Charleston, and other vigorous steps were allowed at the dansants. Those afternoon dances began at three o'clock and continued until five. The same big bands provided music as they had on Friday evening.