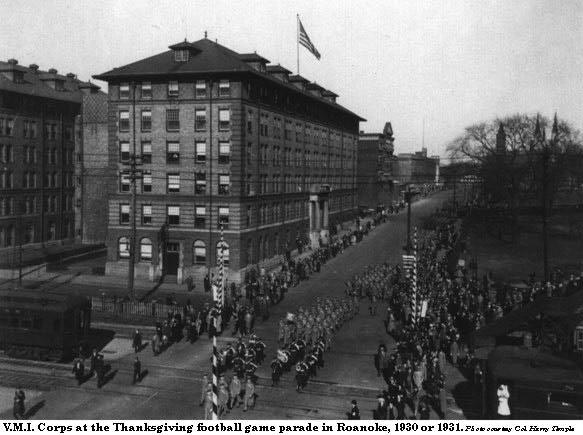 Corps of Cadets marches through downtown Roanoke in the Thanksgiving football game parade in 1930 or 1931.

Meantime, at the Blacksburg campus and also in Lexington, the cadets were exploding in hyperactive excitement. For days previously in their bracing around the Quadrangle, the Rats chanted boisterously, "Come on, V.M.I.!" Noisy snake dancing wound around a monstrous bonfire on the tennis courts of the Quadrangle after Tattoo [end-of-day bugle call], and a Corps pep rally was held in front of Barracks Number One. Cheerleaders and coaches on the roof of the stoop and the Highty-Tighties on the ground stirred up fervor for the day's challenge. Muster echoed from the surrounding hills. Finally, the gentle sound of Taps demanded reluctant observance.

Reveille and mess on Thanksgiving Day morning were lively affairs as raillery took over. In blouses and, usually, overcoats as well, small orange and maroon megaphones slung over the right shoulder from orange and maroon ribbons, the assembly in front of the barracks was a jostling, easy-going formation, for everyone was in a jolly mood. The march to Huckleberry Station behind the heralds of the cadet band was a rollicking occasion with group singing, and the ride on the train was a frolic. At the downtown Roanoke Station, the cadets disembarked with whoops and assembled quickly for a parade through lavishly decorated streets between packed sidewalks of colorful admirers. Another resounding whoop accompanied dismissal at the Patrick Henry Hotel where the young ladies of Hollins College had a tea dance in full swing in the ballroom in honor of the visiting V.P.I. and V.M.I. cadets. The arrival of the V.M.I. Corps by special train occasioned a similar parade through town, and the tea dance gala lasted until game departure time.

Although all places of business other than hotels, restaurants, tobacco shops, and drug stores were closed for the day, the shop windows were festooned with elaborate garlands and displays. Decorated automobiles filled with equally decorated partisans torturously wound their way through the congested streets, their occupants bantering with those on the crowded sidewalks. V.P.I. and V.M.I. cadets were accorded free transportation on all streetcars and buses; their uniforms were their fares. Open houses, luncheons, and cordiality were everywhere as the whole city burst into one great party. Roanoke was in a Mardi Gras spirit.