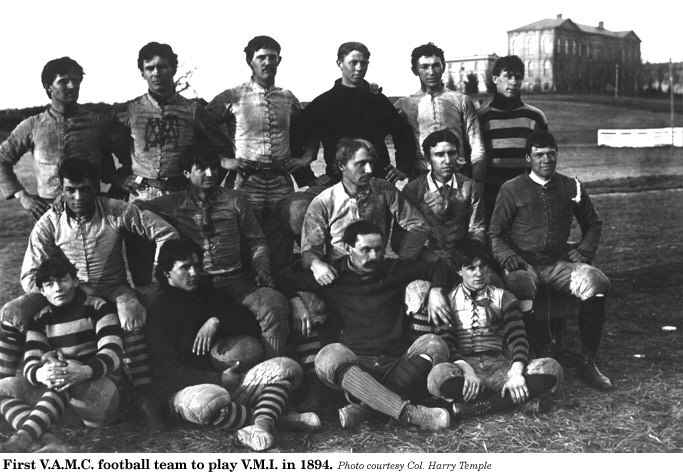 The V.P.I.-V.M.I. football rivalry had its beginning in 1894 at a time when V.P.I. was known as the Virginia Agricultural and Mechanical College (V.A.M.C.). The first contest was held at Staunton, propheticlaly scheduled for Thanksgiving Day. Both V.A.M.C and V.M.I. had achieved four victories that season, and neither team had been scored upon. The V.A.M.C. cadets made a Corps trip of the event, and a contingent of thirty V.M.I. cadets (the maximum permitted by the college authorities) also made the trip. V.M.I. triumphed on the gridiron by a score of 10 to 6 in a closely contested battle. Regarding that game the 1895 Bugle commented, "At half past two o'clock we boarded our train and returned, not feeling the least humiliated over our defeat, for we all vowed that the day of reckoning should come and that with a vengeance."

The 1895 game was played at Lynchburg on Thanksgiving Day, V.A.M.C. had played five games, winning three and losing two. One loss was to the University of North Carolina and one to the University of Virginia. Both these teams were rated as the number one and number two teams in the South, respectively. V.M.I. had played five games, winning all of them, and had been scored upon only once. V.A.M.C. triumphed by a score of 6 to 4 in a hotly contested competition attended by both Corps of Cadets.