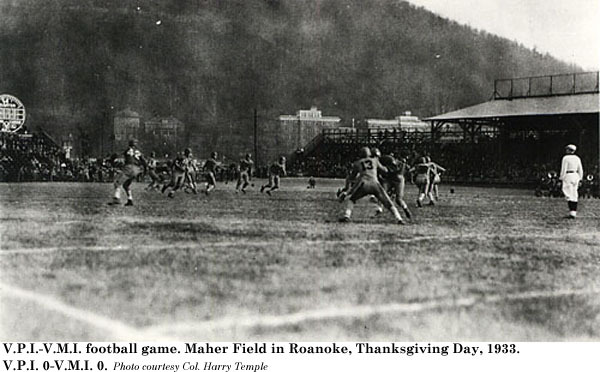 Saturday evening another formal dance was held in each club hall from eight o'clock until midnight with music by the same orchestras. The Sabbath, beginning at midnight, was respected.

The festivities continued into Sunday. Most cadets escorted their dates to church on Sunday, and many of the young ladies would stay for the midday meal.

At noon on Sunday, "Pop" Owens, the genial mess steward, was host at a very special, sumptuous Thanksgiving feast in the College Mess Hall for the Corp of Cadets and their guests. The Collegians (later the Southern Colonels), the college dance orchestra, was on hand for music during the banquet. Colorful, printed menus were at each place, outlining the several courses of the elaborately served repast. All were invited to enjoy as much of everything as they desired. No time limit was imposed, and there was no marching back to the barracks afterwards. The young cadets responded heartily and sounded a robust "Hokie" for "Pop." The last man to leave the College Mess Hall was dubbed informally with the sobriquet of "Growley Hound of the Year," and the time immediately following the Thanksgiving feast was always a relatively quiet period on campus. Thus would end a grand and glorious weekend in the life of a cadet at V.P.I., one to retain enduring pleasure in memories.